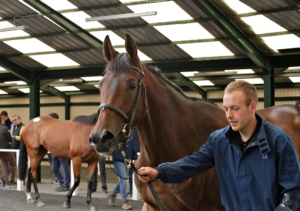 Killeen Glebe graduate MINELLA COCOONER lived up to high expectations on his rule debut, as he eased home a ten length winner of Sunday’s bumper at Kilbeggan.

Second on his sole start for John Nallen, the son of Flemensfirth was subsequently sold privately to David Bobbett and Willie Mullins. Sent off the short-priced favourite on his rules debut, he chased the leaders under Patrick Mullins and made headway from four furlongs out. Asserting with two furlongs left to race, he drew clear approaching the final furlong and won unchallenged.

“He’s an excellent pedigree by Flemensfirth and out of Askanna who was a good mare for Colin Bowe,” the winning rider later commented. “He’s not particularly a summer horse and I think he’ll be very competitive in the winter. He’s above average and it’s good for the owners who had Minella Encore and Mr Adjudicator but have had some bad luck lately.”

Bought as a foal with Kevin Ross Bloodstock, Minella Cocooner was resold by Killeen Glebe through Limekiln Stud at the Goffs Land Rover Sale for €82,000. That same year, Killeen Glebe also sold impressive point-to-point winner Kyntara, who went on to win a bumper by all of 17 lengths on his first start for Kim Bailey.