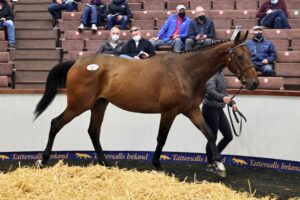 Bought as a yearling in tandem with Kevin Ross Bloodstock, the son of Blue Bresil was sold by Killeen Glebe in our first year consigning ourselves, having previously sold through Limekiln Stud. He was bought at the Derby Sale by Paul Nicholls and Tom Malone for €120,000 and carried the colours of Michael Geoghegan on Monday.

Sent off favourite under Lorcan Williams, he raced prominently throughout and led approaching the final furlong. Staying on well to the line, the bay won by three and a quarter lengths.