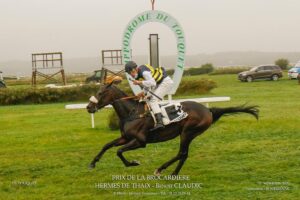 The Hugo Merienne-trained bay was one of fifteen three-year-olds to line up for hurdle contest over two miles and a furlong and a half. Soon settled behind the leader by Benoit Claudic, the son of Poliglote asserted on the back straight and was pushed along approaching the turn for home. Ridden approaching the final flight, he kept on well to score by two and a half lengths. The runner-up Henry D’Anjou went on to win his next start for Gabriel Leenders.